Here are some revision notes for 2.7 that I’ve created and published online. I hope you find them useful!

The spectrum of a star is made up of it’s emission and absorption.

Firstly, we have a continuous emission spectrum, which is usually the rainbow behind it. On top of the continuous spectrum are Fraunhofer lines or absorption lines, caused by cold gas in a star’s atmosphere absorbing light emitted by hotter gases below. Electrons in the gas absorb a photon of a specific wavelength and jump up an energy level. When they jump back down, they release a photon with the same wavelength. This comes up as an absorption line in the spectrum.

Each element absorbs specific wavelengths, and there can be often multiple lines for one element.

Black bodies absorb all radiation that is incident on it, hence they’re good emitters as well. Stars are very close to being perfect black bodies, so we can assume that they are.

Let’s look at some typical spectra of a black body: 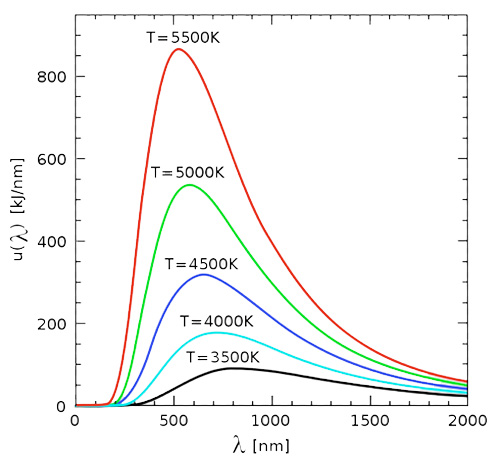 On the y-axis is the spectral intensity (you don’t need to worry about what this is) and on the x-axis lies the wavelength.

This formula is in your data booklet.

Let’s say we were observing a star that had a surface temperature of about 4’500 K. Using the graph above, what colour would this star be?

Firstly, look at the 4’500 K curve. How many nanometres is the peak wavelength?

α boötis, better known as Arcturus, is a very bright star in the constellation Boötes.  After collecting data from Arcturus, its peak wavelength was measured to be 677 nm. What is Arcturus’ surface temperature?

Now we don’t have a graph to refer to, but we have Wien’s law! We know the peak wavelength (677 nm) and we know Wien’s constant, so we’re good to go.

Turn the wavelength into metres by multiplying it by 10e-9.

Now put sub it into W = λ * T, and solve for temperature. 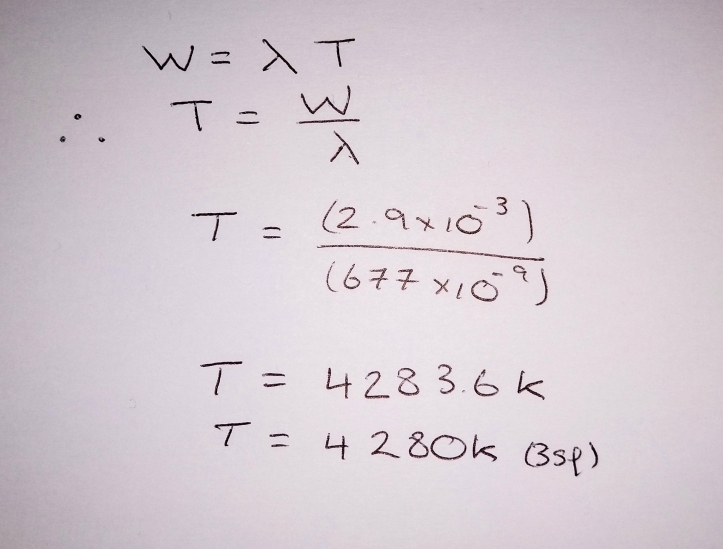 But it’s important to remember that all wavelengths of light are emitted by stars, it’s just that most light will have be the peak wavelength.

This is why we don’t get green stars.

When the peak wavelength is green, we find there are roughly equal amounts of red light and blue light as well. These wavelengths balance out to make one overall colour, which is white.

The Sun and Vega are good examples. Our sun’s peak wavelength is green, but with a bit more red light than blue, so the overall colour is yellow. Vega, contrarily, is a blue-white colour because light peaks in green but there’s more blue than red light being emitted.

Alongside green, there are no pink/magenta stars either, but this is because magenta is just an imaginary colour our brains make up. You don’t need to worry about magenta stars, but you could be asked to explain why there are no green stars.

Arcturus’ peak wavelength is 677 nm, which would be red. If this were any shorter it would appear yellow, and even shorter it would look blue, but what would the colour do to the temperature?

If W is a constant, then shortening the wavelength would increase the temperature. So by deduction, “blue” stars are hotter than the sun, and conversely “red” stars are cooler.

Above is a HR diagram, showing luminosity (power output) against temperature (at the top in this graph). Don’t worry about absolute magnitude and spectral class. Temperature goes from hot to cold in a HR diagram. The points/stars have been coloured so that cooler ones are red and hotter ones are blue.

The stars in the big rainbow strip are part of the main sequence, and so follow normal fusion of hydrogen into helium. Here, there’s a clear correlation between high temperature and luminosity, but as the star becomes a red giant or a white dwarf, that correlation is no longer there.

In a red giant’s core, fusion of larger elements takes place, which actually increases the luminosity. However, the radius of the star increases a lot to stop it collapsing, that the intensity of heat reaching the surface has decreased.

After that, the star’s surface collapses into the core, and is ejected to make a planetary nebula, leaving a tiny white dwarf. All that’s left is a very hot core, but fusion has stopped, so it’s not generating any power/luminosity.

All this talk on luminosity brings us to our next topic, Stefan’s Law.

Stefan’s Law is very useful, as it basically puts the above explanations into a neat and handy formula.

Now we know how to find surface temperature by wavelengths, let’s try finding the luminosity of a star. For this we can use Stefan’s law:

You’ll also find P = IA useful, where P = power (luminosity), A = area and I = intensity (examiners love to make you use this equation and is also in your data booklet).

Sometimes Power is written with an L instead, because it is also luminosity.

Let’s go over a question:

Betelgeuse is a star in the Orion Constellation. We’ve measured its luminosity as 3.828e+31 Watts, and the surface temperature as 3473.15K. Calculate the radius of Betelgeuse to 3 sf.

First, let’s put all the info we know into Stefan’s Law.

Arrange it to get A on its own.

Now we can figure out the radius by dividing it by 4 π and then square rooting it.

It’s no good observing the universe with only visible light. The complete electromagnetic spectrum needs to be used.

Multiwavelength astronomy is observing with all types of light, from radio to gamma. It reveals a lot more about the universe, because different types of radiation can reveal different processes occurring.

Have a look at the Crab Nebula. From the visible light, we can tell the red parts are remains of the star and the blue comes from electrons interacting with a magnetic field, but with only visible light, you couldn’t easily tell that the field belongs to a pulsar.

Look using radio waves, and the star becomes visible. From this image and the dimensions of the nebula, we can tell that the star is most likely a neutron star. The infrared shows electrons trapped in a magnetic field, meaning there’s something large in the middle that’s generating a strong magnetic field.

In the X-ray the pulsar is clear and its pulses can be seen. The nebula looks smaller than in the other images, suggesting that high energy electrons are mostly near the star, hence the star’s probably the object that’s heating them up.

That’s about it for 2.7 Radiation to Investigate Stars. Topic 2.8 can be found here if you need it.

Here’s a fairly good question bank if you would like to do some exam prep.