When it comes to learning astrophysics, it’s a good idea to start with the basics: the solar system. It may sound trivial to you, but getting a firm grasp on it early is vital to progress into the field of space.

Let’s start with the very centre of the Solar system.

The Sun used to be called Sol (it’s Latin name, and also where the adjective solar stems from), and is arguably the most important part of our system.

Some cool stats about the Sun:

I recognise that some of these may not make sense to some of you. Do not fear, as I will be going through each of these as we go.

Our Sun is a Yellow Dwarf

The Sun’s radius (the length from the centre of the sun to the surface) is about 100 x Earth’s. From this we can also gather that the volume of the sun is over 1 million times bigger than Earth. That’s incredibly huge, yet our sun is a fairly small star when we compare it to other stars. Small stars are called dwarf stars, our sun being one of them.

A star’s size can reveal a lot more than just whether it’s a dwarf or not. In the diagram above there’s a very long rainbow line that goes from one corner to the opposite. This is our main sequence line, where the sun lies.

The sun’s surface temperature tell us it’s a G-type star, so it sits snugly in the yellow area of the line. From the size and the spectral class, we can label the sun as a yellow dwarf (sometimes also a G-type main sequence star, but that’s a mouthful!).

How Far is The Sun?

We can also measure this distance in light years (the amount light travels in a year), but the figure is nowhere near a year, let alone a day. Light from the sun to Earth travels 8 light minutes.

Our Sun can be split into layers, the first being the core. Being the most interior of all parts, the core makes up a large amount of the sun (about ¼) and is the hottest part, being in the region of 10-16 million Kelvin.

Although it is right in the middle and covered by all the other layers, this is the area that nuclear fusion takes place. The energy the sun uses and all the heat and light from the sun that reaches Earth comes from the core. Despite this, we’re not quite sure what the core looks like, nor how exactly the energy escapes all the layers and makes it to Earth.

Next up is the radiative zone, where energy is very slowly carried outward through radiation. The inner part is still very hot, reaching 10 million kelvin but not quite that of the core. This part of the sun has lots of plasma, so the energy can’t escape that easily.

For those that don’t know what plasma is: Since the sun is so hot, it ionises the gases that make up the sun, splitting atoms into positive ions and free electrons, making it electrically conductive. This is plasma.

The third layer is the convection zone. It’s much cooler than the other two layers, so when the energy enters the zone, it is carried out via a convection current. The plasma at the bottom is very hot and quickly travels up to the top of the zone. The energy is transferred out of the zone, so the plasma then sinks back down and starts this again.

The next three layers make up the Sun’s atmosphere. They are very thin compared to the interior layers and mostly very cool.

First up, the photosphere. This is where we take the surface temperature measurements, since the other two layers are so thin and not dense. This is where energy can escape the sun as photons. This layer is about 6,000 Kelvin but also has cooler areas such as where sunspots are.

There are many interesting features of stars which can be seen on the photosphere of the sun, giving us a really close view. You’ve probably come across these, like sunspots, but here I’m going to go into what they are, how they happen, and why.

The sun isn’t a solid body like the Earth. It completes a full rotation in 36 days at the poles but 26 days at the equator. However, one thing it does have like Earth, is a magnetic field. Since it rotates differently in different parts, the magnetic field twists, causing loops.

It’s a bit hard to visualise this, so let’s think of an example of something similar happening. Imagine some cables or yarn. Grab two points and twist them in opposite directions to each other.

As the cable twists, it starts to bunch up and cause a loop. This is similar to what happens in the sun. These loops of magnetic force break through the surface, stop convection in that area, and cool the area down, which is why sunspots appear dark.

Looking at the above image, we can see that there’s not just dark spots and the normal photosphere, but there’s not-so-dark areas too. The dark centre is called the umbra, and the surrounding area is the penumbra.

Another important mention is that there are two sunspots in this image. The field emerges and disappears back into the sun, creating two spots. These come in pairs for this reason, although there are cases of single spots too.

These phenomena last from a few days to months, but larger sunspots generally last longer than smaller ones.

If the magnetic energy of a sunspot releases, a sudden distinct fluctuation in brightness occurs. This is a solar flare. This large brightness comes from radiation being emitted across all of the electromagnetic spectrum at extremely high intensities, most of it being x-rays. It’s like a massive plasma explosion!

Flares differ in strength, so we classify them by intensity into 5 categories, A, B, C, M, and X, where A is weakest and X is strongest.

Flares tend to be short and local, and although they are bright, aren’t often easily distinguishable against the photosphere.

An intriguing result of flares is that they create a flow of charged particles, such a protons and electrons or nuclei, which leave the sun’s atmosphere, and often reach Earth. These particles aren’t usually of any problem since our own atmosphere and magnetic field block them, and often create fantastic colourful skies, however, the trouble tends to lie more with coronal mass ejections.

Normally following a solar flare, coronal mass ejections are huge eruptions on the surface that eject tons of plasma and radiation outwards very rapidly. CMEs can also be caused by filaments and prominences (we’ll discuss what these are later).

CMEs travel away from the sun and spread out, with a few reaching Earth. Their speeds vary, from taking several days to reach us, to just over 15 hours.

Our magnetosphere protects us from most radiation, charged particles and solar winds. If, however, the CME is strong enough and travelling towards Earth, it may disturb the magnetosphere and cause a geomagnetic storm, the most famous storm being the Carrington Event in 1859.

A really large storm would be a major problem to us. Although it wouldn’t affect us people, it would disturb satellites, cables and power sources to say the least. We would be set back years just from one storm.

Filaments are groups of plasma cooler than the rest, shaped into arcs by irregularities in the sun’s magnetic field. Similarly to sunspots, where cooler areas appear dark, filaments look dark in images and usually are shaped like lines and curves.

Filaments and prominences vary in duration. Just like sunspots, they last from a few days to months. As they move away from the surface back into the core, they stop being visible to us. Much is still unknown about these phenomena.

Solar winds are the reason we have phenomena like the aurora borealis, yet that wasn’t understood well until recently.

The Sun’s corona is extremely hot, on average 1 million kelvin. The charged particles in this area of the surface have such a high energy that they are able to overcome the gravity of the sun and escape into space. This is solar wind. Some particles that make up the wind come from flares and CMEs as well, varying the speed, density and temperature of solar winds.

Our own magnetic field does well to protect the Earth’s atmosphere from such winds stripping it away. The magnetosphere is where the solar winds interact with our magnetic field. Since Earth has a magnetosphere, it can block most of the radiation from the Sun. If you’re interested in learning more about magnetic fields and dynamo theory, have a look at this from MIT News.

Solar winds seldom disturb our radio reception by interfering with Earth’s ionosphere, but can also have a wonderful impact on Earth. When some of these charged particles enter the magnetosphere, they interact and collide with particles in the atmosphere, releasing energy in the form of light. This makes the wonderful Aurora Borealis! 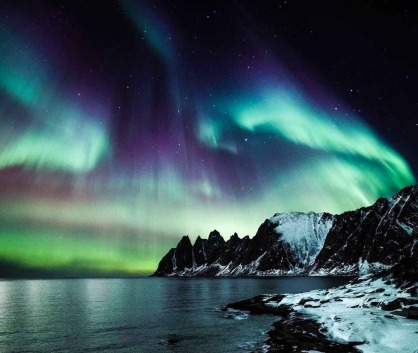 Do All These Relate to Each Other?

What common feature of the sun influences the occurrences discussed? The majority rely on the sun’s magnetic fields to be produced, so is it possible to see correlations between each type of event?

The short answer is yes. All solar events are unique, yet when we measure the frequency of each event occurring, patterns start to arise.

It was in 1843 that Samuel Schwabe realised sunspots frequency varied periodically, and thus began the idea of the solar cycle.

Today our understanding of the solar cycle is far more extensive. We’ve observed solar activity for centuries, and have enough data of it to predict future activity, and reconstruct past cycles.

The mean time between each lowest point is 10.8 years. The data above is small, but it fits trends other people have found, which is 11 years.

So if there are such correlations, could they be due to the magnetic field?

Lastly let’s go through a wonderful event that anyone can see without the need of a telescope; eclipses!

An Solar eclipse happens when the Moon passes in front of the Sun, so that it blocks the sun from our view, except the chromosphere and corona.

When the moon only blocks some of the sun, it is called a partial eclipse. A total eclipse is where the moon completely covers the sun, creating an umbra (the solid black area below). Anybody standing on the surface where the umbra touches would see the total eclipse. People in the area of the penumbra (grey-ish parts) would see a partial eclipse, since some of the sun’s light is reaching them.

The reason I love lunar eclipses is because the Moon is still visible. Even though the moon is in the umbra, there is still light that reaches it.

Sunlight is still reaching Earth, importantly the atmosphere. Violet and blue light is scattered in the sky, but red light refracts in the atmosphere, bending into the umbra onto the moon. Cool, right?

I wrote about the 2019 total lunar eclipse in a post here.

That’s all for the sun so far. Next up are the planets.

Want to read a bit more?