Beyond the rocky and gassy planets lie the ice giants. Today, we’ll go over the two ice giants in our solar system, and what makes them unique.

What is a Planet?

To this day, the definition of planet is up in the air. A planet is widely accepted as something that orbits a star, has a large gravitational force (but is still less than a star’s), and has a clear orbit path. Our knowledge of planets is still growing, and so our understanding of what a planet is will change as well.

What Kind of Planets Are There?

Just like stars, planets come in many types, our solar system being very rich in planet diversity. Planets are classified into four groups: terrestrial planets, gas giants, ice giants and dwarf planets. From that they can be classified even further. Think about which class you would place each planet in our solar system.

The coldest of all our planets are 2 ice giants: Uranus and Neptune. Ice giants are similar to gas giants, but instead of hydrogen and helium making up most of the planet, heavier elements like oxygen, nitrogen and carbon, but also methane, ammonia and water.

Ice Giants in Our Solar System 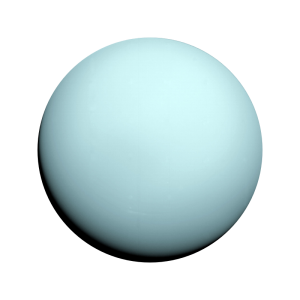 Uranus (however you may pronounce it) is the third largest planet in our solar system, and yet remains very unexplored. Uranus is much smaller than Jupiter and Saturn, but still is gigantic when put against Earth.

It takes 84 Earth years to complete one Uranian Year, which is unimaginable to some. On the contrary, a day only lasts 17 hours for the same reason that the gas giants rotate quickly; since Uranus had a larger core than Earth, it could pull in more matter which increased Uranus’ rotational velocity.

We have only ever sent 1 spacecraft to Uranus, Voyager 2. It studied the atmosphere, the magnetic field, moons and took pictures. Hence, all our knowledge and theories of the core and inner layers are based off of these, we don’t know what it’s like with certainty.

We expect the core to be silicate, similarly to Earth’s core. The core of Uranus makes up a very small portion of the planet. Above this core is the mantle, made up of icy material: ammonia, water and methane. Although these are called ices, they are all fluids (liquids or gases). Uranus’ mantle is very large and makes up the majority of the planet.

Uranus’ atmosphere is largely made up of hydrogen and helium. The atmosphere also has some methane gas, which absorbs red light and emits the other colours, making the planet appear light blue.

The most tilted of all planets is Uranus, at a staggering 97.77 degrees! Uranus’ seasons are extreme. It takes 84 years to orbit the Sun, meaning each pole will experience about 42 years of only sunlight, followed by 42 years of darkness. Since it’s pointed almost horizontally, the poles often point directly towards the sun, or directly away.

We’re not sure how it got its tilt, but many believe it was an Earth-sized object that crashed into Uranus. Some may not enjoy complete darkness for half their lives, but personally I think it just means more stargazing!

Observing With A Telescope

Although it’s far away, you can probably see the blue planet with just binoculars. If you have a very dark night, Uranus is visible to the naked eye, but it looks very much like a star.

Looking through a regular telescope, Uranus will look like a fuzzy tiny blue dot. If you happen to have a larger telescope (an objective of above 4 inches/100mm) and can get a high magnification with it, the rings can just about be seen, making the planet look like a disk.

That dot may look small, but remember even the best telescopes struggle to get any detail of Uranus’ atmosphere.

Our 2nd Ice giant is the mighty Neptune! It’s the furthest planet in our solar system (I’m not allowed to count the dwarf planets unfortunately). No human so far has lived to one full Neptunian year, but unlike its year, Neptune’s day is fairly short.

What can I say that I haven’t already said for Uranus? Both ice giants’ inner layers are very similar in structure.

Neptune has a small silicate core where pressure is incredibly high. The size of the core is very small compared to the mantle. Above the core lies icy substances like methane, water and ammonia, making the mantle.

Above the core and mantle is the atmosphere, where hydrogen and helium dominate. The methane in the atmosphere absorb red/infrared light, giving Neptune it’s deep oceanic blue. However, we’re not exactly sure why Neptune looks bluer than Uranus.

At the very top of the atmosphere lie clouds of methane, and cast shadows on below clouds. Clouds below are suggested to be made up of ammonia, water ice and even compounds containing sulphur.

Some of the highest clouds look similar to smog/haze. These are made of hydrocarbons similar to ones we have on Earth. Maybe Neptunians are experiencing an industrial revolution.

Looking at Neptune Through A Telescope.

In a dark sky (and with good eyes), Neptune looks just like a very faint star. Finding it is difficult.

Trying to use a very small telescope will be a struggle, and you most likely will see a teeny tiny blue dot. I won’t stop you trying, though 😉

Why Are Ice Giants Icy?

Icy doesn’t mean the planet has ice on it, although it’s pretty close. Uranus and Neptune contain a lot of volatile materials like methane, water, nitrogen and ammonia (volatile means they evaporate easily at room temperature). These substances are also called icy substances, hence these volatile compounds are what give the giant the “icy” part in their name.

Initially, planets were just clumps of debris. By gravitational force, the debris clumped together into larger chunks. This repeated more and more as the planets grew bigger, because as the total mass increased, so did its gravitational pull.

This is how we expect a planet’s core is formed.

Beyond this point, we can’t say anything with certainty.

Uranus and Neptune’s cores were made up of both rock and ice, meaning they had larger cores than terrestrials. Given that both planets have large amounts of icy material, it can be inferred that there were high amounts of water vapour, methane and nitrogen surrounding the ice giants, along with small amounts of hydrogen and helium.

As they pulled the gases in, the planets’ mass increased, which in turn allowed them to pull in even more material.

As the ice giants finished forming, what we ended up with are large planets with lots of volatile fluids.

That is it for Ice giants today. Next week, we’ll be looking at the dwarf planets.

Happy #pride to all! I guess it gives me an excuse to wear my rainbow scarf and fancy clothes 😉 who'd a thought that even in 2021 being LGBT+ would still be frowned upon, but I guess we can only get better!
No telescope? No problem! #space #astronomy #astrophotography
Here is an attempt to crochet a supernova. It was a fun way to spend the afternoon at least 😂 #space #astrophysics #astronomy #supernovas
Having some fun making #art instead of exams. Why won't spring break come faster 😔