It’s been 50 years since we landed on the Moon, so let’s learn a few interesting facts about Apollo 11!

Apollo 11 was the 8 day mission that landed Neil Armstrong, Buzz Aldrin, and Micheal Collins on the Moon. To this day, Apollo 11 marks the furthest journey into space that humans have travelled!

The launch was televised in 33 countries, and had 3’500 reporters and 1 million citizens watching live near the launch site. There were over 25 million Americans watching the launch live on TV.

Within 12 minutes, Apollo 11 was already 185 km above the ground (Earth orbit), but it would take a few days before they were close to the Moon.

Whist on the Moon, Armstrong and Aldrin collected many lunar rock samples, in total a massive 21.5 kilograms! Breccia and Basalt were found in the samples, and three new minerals which were named armalcolite, tranquillityite, and pyroxferroite. Along with samples, they installed seismometers to detect moonquakes, and a retroreflector array for laser ranging.

The Moon landing is a reminder of what great achievements humans are capable of! Within the next decade we are expecting another moon landing. Artemis is a new mission NASA are working on, and is expected to launch in 2024!

This mission, however, will not only reach the Moon, but eventually Mars! 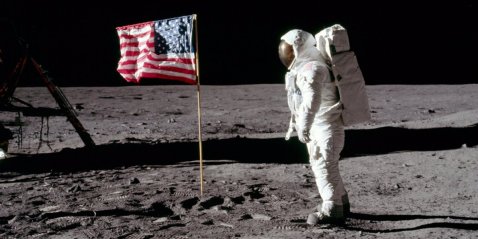 One thing that I particularly enjoy looking at are GIFs of Buzz and Neil falling over! Of course, walking with a gravitational force only a sixth of Earth’s is tricky. Both astronauts reported that they needed to plan six or seven steps ahead.

And it probably was difficult getting up again too!

Red Bubble has a huge selection of Apollo 11 t-shirts and merchandise!

Or visit the Smithsonian Air and Space museum and look at some amazing lunar artefacts!

Images all taken from nasa.gov