You know what we’re going to make sense of today? Black holes! 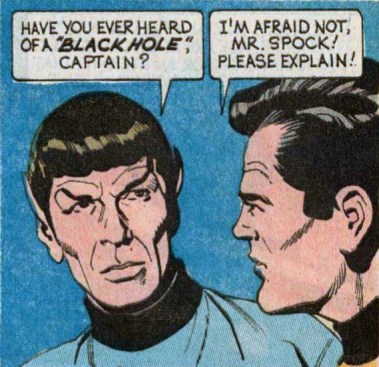 These black holes are teeny tiny, 0.00000001 kg on average. They were created closely following the big bang, which means the smallest of the lot should have all evaporated by now.

Astronomers aren’t sure on how they’re made, but it is hypothesised that they were made during a time when radiation dominated the universe.

These black holes are the types students know and love, as they’re formed by the collapse of a massive star. Stellar Black Holes are anywhere between 3 and 1000 solar masses, but can eat their way above the upper limit.

The life of a star is mainly determined by its mass. Large stars that have masses above the Tolman-Oppenheimer-Volkoff limit (roughly 2.17 solar masses) become supernova and then black holes, however very large stars can skip the supernova entirely. This is called a massive fail.

These humongous monsters are about as old as their host galaxy, and anywhere up to a billion solar masses. The best hypothesis for their formation is that they’re a stellar black hole that’s eaten a whole lot of other stars and gas.

If you thought black holes couldn’t get any bigger, think again!

TON 618 is a quasar in Canes Venatici. It is the largest black hole ever discovered, at a gigantic 66 BILLION SOLAR MASSES!

Given that the USS Enterprise NCC-1701 travels at warp 6 most often, which is 216 x the speed of light, it would take a mere hour and 40 minutes to travel TON 618’s diameter, assuming we’re talking about The Original Series and the Schwarzchild radius of TON 618 is 1300 AU.

I couldn’t find any pictures of the galaxy, but it is described to be violet.

This is part one of Black Hole Basics. In this series, we’ll also cover mathematics and properties of black holes, along with other amazing facts about them. Bye for now!

Having some fun making #art instead of exams. Why won't spring break come faster 😔
Say hi to my new baby! She's my first bass, 1 day old, no name yet. I need to find a name, any suggestions? #bassplayer
I tried my best at painting Neptune. I tried... #space #astronomy #neptune
I hold the damn cider like it's a tea cup, just goes to show how little I drink 😂 Happy Dísablót, raise a glass to 2021 being a better year than before!