In our previous post on black holes, we covered the three main types of black holes. Today we’re going over the properties and features of a black hole.

The Make-up of a Black Hole

There are two parts of a black hole that we’re going to cover today, the event horizon and the singularity.

The Event Horizon is the beginning of the black hole. Any event inside that takes place beyond it can never be seen from the outside, because after this point light can’t escape the black hole. Creepy!

Just before the event horizon, atoms experience some serious time dilation from the immense gravitational force on them, so it looks like they are taking forever to get to the border. It’s the one bit of black hole physics that Interstellar didn’t mess up!

The Singularity is the central area in the black hole where physics takes a holiday. It’s modelled as a one dimensional point with infinite density, but the shape of the singularity could even be a ring!

Bear in mind that differences in gravitational force per unit distance are far larger than anything on Earth. The force on your legs will be so much larger than the force on you head that you’ll be stretched and spaghettified!

The size of a Black Hole 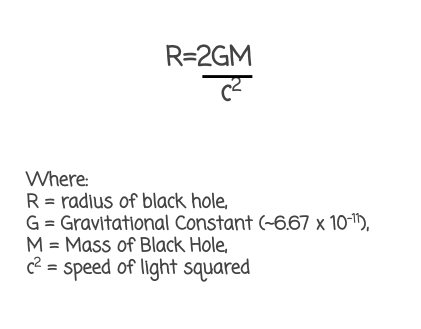 As you can infer, the radius is directly proportional to mass, as 2, G and c are always constant.