Meteors are bits of rock and debris that gets burnt up in the Earth’s atmosphere as they pass us. The meteor gets heated up from the friction between it and the air, and the air around is slightly ionised as the rock zooms through the atmosphere, which is why they glow.

Meteor showers are swarms of rocks that Earth passes though all year round. We’ve just passed the Quadrantids this January and the Centaurids in the South are about to peak! With such a huge gap until the Lyrids, I thought it be best to write about all the next big showers Earth will see in 2020.

Below are the bigger showers that Earth experiences, usually with very large amounts of meteors per hour. Whilst the dates for some showers (such as the Leonids) are different for each hemisphere for accuracy, the meteors may not be visible from every part of the hemisphere. I’ve also made the dates based on multiple sources, so they’re quite broad for this reason. 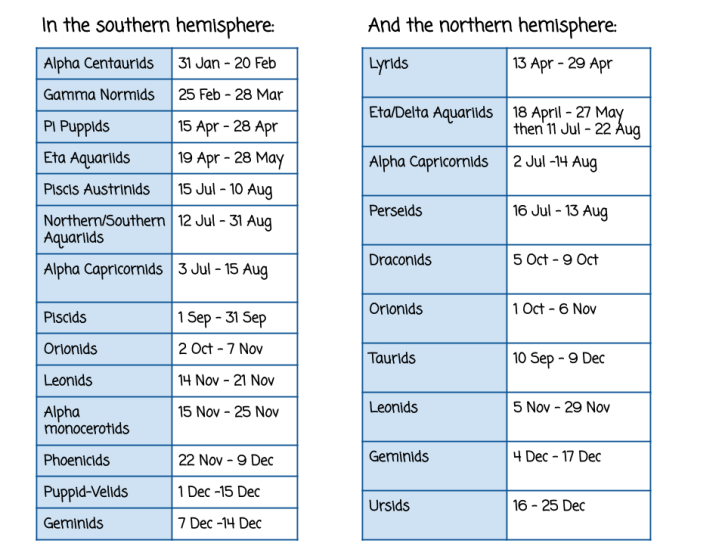 While swarms are ideal for astrophotography, the odd meteor is a great sight for the stargazer! You will rarely have a night without meteors, and you do not need to stick to these dates only. Go out and look for them whenever you please!

If you want more information…

The royal astronomical society of New Zealand has more info on meteor showers in the southern hemisphere. Unfortunately I am very uninformed when it comes to meteors and rarely do any work on them, so I recommend checking out the International Meteor Organisation. They definitely know something about meteors.

Until next week, have fun!