What’s better than cake and physics? Well, a physics cake of course!

[Spoiler: The cake failed, but if you want to laugh at it then read on.]

This year I decided to participate in my school’s annual physics cake competition, and believe me when I tell you this, I have not had this much motivation since the bean-2-bar poster competition when I was 12.

Firstly, the design and most importantly, the flavour!

As an astronomer, it would be hard to not bake a space cake. I wanted something original but colourful, so after browsing a few ideas I decided to base my cake on the Cosmic Microwave Background.

I decided that the outside will have the iconic CMB mottled design, made of multiple colours of teeny pieces of fondant.

The inside will be a black cake, sparsely filled with various sprinkles and sugar-y things to represent galaxy superclusters and all that fun stuff. Given that the density of matter in the universe is about 0.85×10−26 kg/m³, I shouldn’t really put anything in the cake.

But it’s a cake, it’s already not to scale.

The most important part, however, is the flavour. I was intrigued by a study by the Max Planck Institute for Radio Astronomy, Cornell University, and Cologne University, which confirmed the existence of a compound called ethyl formate within the Milky Way.

Ethyl formate is a compound which contributes to the flavour within raspberries.

With no other research articles on suitable flavours (and my love of raspberries), I chose to flavour my cake with chocolate and raspberry.

I made the cake batter as according to the recipe, and added blue food dye and sprinkles. I was going to add raspberries, but I ate them all.

I baked two cakes in a circular tin and stacked them using a very light layer of raspberry jam. After the cake was completely set, I began carving away to make a dome shape, all whilst eating the cutoffs.

I’ve never added fondant to a cake, and apparently I needed something to make the fondant stick. Of course, that glue would be raspberry jam. 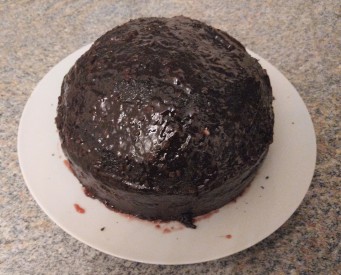 To make the background, I cut a few pieces of blue, orange, and green icing circles, overlapped them slightly, and rolled them all together into one big sheet of icing and gently wrap that around the cake.

At this point, I started questioning what I was doing, literally and philosophically.

I used a bottle cap to cut tiny circles of every colour fondant I had, and dotted them “strategically” around the cake with petal glue (diluted sugar and cornstarch) until I was no longer distressed at how it looked. The cake eventually had about 3 layers of icing.

And I had had enough for the night!

I brought the cake in and it was judged along with roughly 11 other awesome physics cakes! Below are the spacey ones; a chocolate galaxy tart, a lemon Jupiter Magnetosphere cake (the tastiest cake), and an Earth-in-a-gravity-well cake! 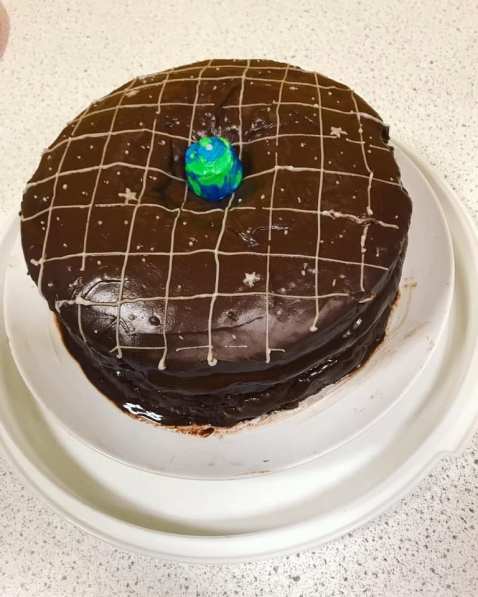 I came runner up, with the winner being the gravity well cake! I won a fuzzball sticker and a spring. I also got to eat everyone else’s cakes too!

Well done to everyone who competed! You all did great, even Ollie! 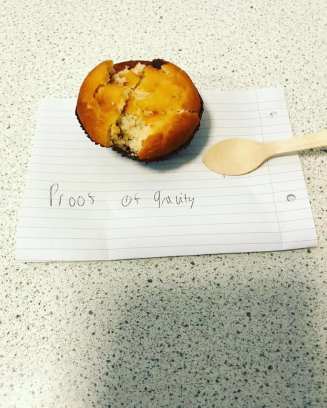 New telescope! Swipe to get zapped!! This new baby is a Meade ETX-80AT-TC, computer controlled, and completely new to me! Let's hope to get some great views from it in the future! #Space #astronomy #astrophotography
I thought I'd share one of my oldest #astronomy books, written before Neptune's other moons' discovery! Such beautiful images, and a great read. #space #astrophysics #science