Black Holes are so loud when it comes to electromagnetic radiation, there’s just never peace and quiet in the night sky!

The black hole itself doesn’t emit a lot of radiation, except from Hawking radiation supposedly. The radiation we’re talking about comes from the effects of the black hole on its surroundings, like the interaction with an accretion disk. Today let’s explore two types of emission: Radio waves and X-rays.

Quasars and Active Galactic Nuclei are known to be sources of radio-waves. Galaxies that have a very radio-loud galactic nucleus are called radio galaxies, and the emission of these radio-waves is sue to synchotron radiation.

Charged particles (like the proton and electron) moving at relativistic speeds interact with the black hole’s magnetic field which causes them to move in a spiral path and hence accelerate. They emit EM radiation in the form of radio waves in this process.

Radio galaxies sometimes have extra features such as jets, and astronomers believe that these jets are a product of the black hole’s magnetic field. As the black hole consumes matter from the accretion disk, some of the matter is expelled outwards either as one jet or two. Centaurus A is a nearby radio galaxy.

The generation of such magnetic fields is still heavily unknown and under a lot of research.

Charged particles aren’t the only thing to emit EM waves.

High Mass X-ray Binaries (HMXB) usually contain one large star which quickly goes supernova and then becomes either a neutron star or black hole. For today, we’ll focus on if the star becomes a black hole.

The death of the larger star may actually disrupt the binary entirely, but if it doesn’t then the companion star will simply evolve to the end of its own life in time. The star will expand to become a red giant/supergiant, to then have its outer layers eaten by the black hole. Well not as quickly as that.

The outer layers form an accretion disk around the black hole, which begin to orbit the black hole extremely quickly. There is a very steep speed gradient as we approach the event horizon (this is due to the gravitational force increasing tremendously as we get closer), so material travels at very different speeds. The friction between the matter releases a lot of heat and by the time it is close to the black hole it is so hot that the disk emits X-rays!

This accretion X-ray process isn’t limited to binaries, but one of the biggest sources of cosmic x-rays is, in fact, a binary. Cygnus X-1 is a system in between Cygnus (of course) and Lyra. Currently, it seems to be just under 15 solar masses and is made of a large stellar black hole and a blue supergiant! That’s a decent meal!

And a bit of both…and more!

3C 273 was the first quasar ever found, and the active galactic nucleus (which includes the black hole) is a well-known source of both radio and x-rays, and Gamma rays, and visible light, and Infrared, and practically everything! 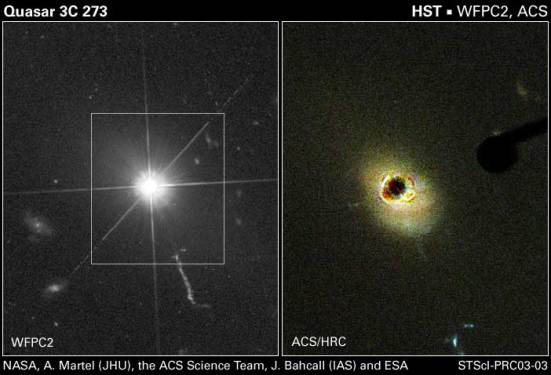 The two images above were taken with Hubble’s WFPC2 camera and ACS camera, both of which look between far UV and near IR. As you can see, the center of the quasar is pretty bright in both images; there’s a lot of emission of UV, IR, and optical light.

These images are from multiple sources, and are focusing more on the jet stream of 3C 273.

Although, the point I make is pretty clear: there’s activity across the whole EM spectrum, and the nucleus of the quasar is still very distinct in all these images.

This is not exclusive to this quasar, galactic nuclei emit lots of different types of EM radiation.

I just think it’s amazing how different an interstellar object looks when you just change the wavelengths of light you’re observing in.

That’s all for this week. Tune in next week where we’ll show some love for another wonderful planet in our neighbourhood!