Neptune is the fourth largest planet in the solar system, and one of the mightiest! This blue planet is over 4 billion km away from the Sun, travelling in an almost perfectly circular orbit!

If that isn’t impressive, hold on for a bit and let me try to convince you of Neptune’s awesomeness!

Neptune is one buff planet!

We all know muscle is denser than fat? Well, I guess the same idea could be applied to planets too. Neptune is the densest of all gas planets, mainly due to the fact that it is mostly made of ices (volatile substances) and rock.

Neptune has a relatively small but high-pressure silicate core. The majority of the planet is actually just mantle, made up of icy substances like methane, water and ammonia. These materials are naturally a bit heavier than hydrogen and helium, but there are other factors such as pressure and temperature which will also affect the volume of the materials, and hence the density.

Above the core and mantle is the atmosphere, where there are gases like hydrogen, helium and most importantly, methane. The methane in the atmosphere absorbs red/infrared light, meaning bluer colours are reflected better. 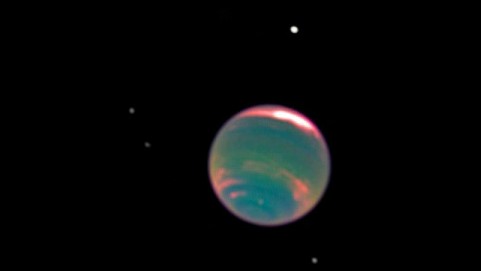 Above is an optical + near IR image, showing where the methane is concentrated. It’s the methane that gives Neptune it’s deep ocean blue. However, we’re not exactly sure why Neptune looks bluer than Uranus. I guess he’s going through something.

…sometimes he’s just under the weather.

Very few planets experience changing weather, but Neptune goes further and has his very own climate!

The blue planet experiences harsh storms, some of which travel almost twice as fast as the speed of sound in air!

The most famous one is the Great Dark Spot, discovered in 1989 but disappeared within the span of 5 years. Others you may not have heard of are the Small Dark Spot and The Scooter (what kind of a name is that?). Both of these were located a little more south than the Great Dark Spot.

The best theory so far as to what these stormy spots are, is that they’re vortex storms that have formed in the lower layers of Neptune’s atmosphere.

Above these spots lie clouds of methane, ammonia, water ice and even compounds containing sulphur! Some of the highest clouds look similar to smog/haze. These are made of hydrocarbons similar to ones we have on Earth.

Even Earth doesn’t get that many different types of clouds! Neptune is an amazing planet, which will surely get more attention from us soon!