This page will go over the space topic for Edexcel A-level physics. Firstly, I just want to say how tiny the topic is. I’m so sorry to all the astronomers who have to study this.

Measuring distances is very difficult to do in space. Rather than finding actual distances, astronomers find relative distances and then calculate the actual distance. This was the case in early Astronomy; planet distances were calculated relative to earth, using astronomical units (AU).

An AU is roughly 146 million km, and is the mean distance from Earth to the Sun.

If a star were 100 light years away, then the light emitted by the star has taken 100 years to reach Earth, meaning we are actually seeing 100 years into the past.

The unit of measurement that is mostly used in current astronomy is the parsec (3.09 x 10^16 m). It is useful because we can measure parallax with it.

To actually calculate distances, astronomers use a distance ladder. Basically, we find a close distance object using 1 method, then calibrate our next method using the previous to find a further object. This sounds terribly complicated, but I shall go through this bit by bit.

When you walk or drive anywhere, the objects closer to you move faster than objects further away. This is called parallax, and how quickly the objects move are determined by how far away they are. The Earth’s motion around the sun causes a larger movement of close stars relative to distant ones.

Parallax works for very very close objects; once you get past 150 light years, it isn’t accurate enough.

To find the distance of a nearby star using parallax, you need to watch the star’s movement over the year relative to nearby distant stars. 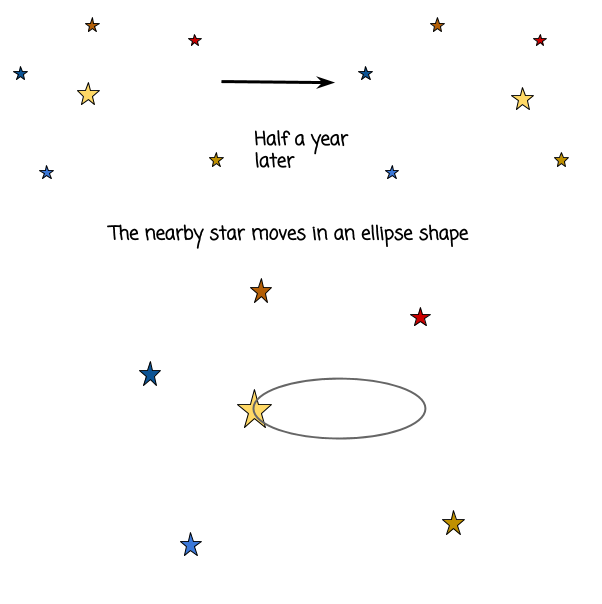 The near star will move in an elliptical shape (either a circle, oval, or line). The distant stars, however, will not make any shapes in the sky but will stay put.

Find the center of the ellipse and measure the semi-major axis (distance from center to furthest point). This measurement must be in arcseconds (don’t worry about that, all you need to know is 1 arcsecond is 1/3600 degrees)

Now all that’s left is to use this handy formula:

A nearby star makes an ellipse shape over the year. It’s semi major axis is 0.005 degrees. How far away is the star?

Now sub the semi-major axis into the formula:

After about 150 light years, parallax can’t be used. From then on, you need to use main sequence fitting.

Main sequence fitting uses temperature and brightness of stars to calculate distance, and uses an adapted version of the Stefan-Boltzmann law: 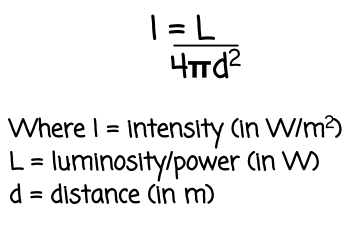 That’s all you need to know for main sequence fitting, but finishing it there would be sinful in my opinion, because that’s only half the story.

Luminosity is difficult to measure if you haven’t got a distance. Instead, if we take a closer similar object of known distance (calculated from parallax) and measure its intensity, we could set up an equation that gets rid of luminosity.

This will work if the two objects are similar in size, temperature, and chemical composition. It doesn’t have to be spot on, but close. That way, their luminosities are similar and we can treat it as a constant.

Above, I cancelled out the constants and L, leaving only the distances and intensities. This is how we “calibrate” our methods; finding a distance with one technique, then using it to adjust the next one.

If we analyse each star more we can correct the errors and get a distance with 95-97% accuracy.

A bit of practice:

A star cluster is 10 parsecs from the Earth. You measure the intensities of all the main sequence stars in this cluster.

You want to work out the distance to a dwarf galaxy orbiting our own Milky Way. You measure the intensities of the stars in this galaxy, and find that they’re typically ten thousand times fainter than those in the nearby star cluster.

What is the distance to the dwarf galaxy (in parsecs)?

It doesn’t matter if you haven’t been given any intensities. We can make up arbitrary units, and set the cluster’s intensity to be 1, and the galaxy’s to be 1/10’000.

First put what we know into the distance ratio equation.

Main sequence is outdated for even larger distances. We need something far away with known, regular luminosities. Cepheid variables and type 1a Supernovae are perfect standard candles.

As a bit of background, Cepheid variables are giant stars that pulse. They pulse very regularly and there’s a correlation between their pulse period and luminosity. If we know the time between pulses, we can find the luminosity.

Type 1a Supernovae are extremely large explosions from white dwarfs. The star reaches a point where it ignites and converts carbon and oxygen to nickel, iron, and cobalt. These are very bright.

There’s lots of Cepheids in the Large Magellanic cloud (close and can be measured with main sequence fitting), so all we need is to find a distant galaxy that has them. Once a galaxy has been found, we can use the intensity-distance equation and find a distance!

In further galaxies, type 1a supernovae can also be used, but there’s less of them out there.

Now for a question

Using main-sequence fitting, you find a nearby dwarf galaxy is 50 kiloparsecs from Earth. Within this galaxy, you find lots of Cepheid variables. When you plot their intensity against their pulsation period, there’s a strong correlation (these are the blue stars below).

You found one Cepheid variable in a giant spiral galaxy – its intensity and period are shown as the purple star in the plot above.

Use the Cepheid luminosity/intensity relationship, measure the distance to the far-away giant spiral galaxy.

Cepheids have strong correlations between pulse period and luminosity, so you need to ind the corresponding blue star with the same pulse period. That way, you’ll know they have similar luminosities.

Now, sub these figures into the distance ratio equation:

The Life Cycle of Stars

The Hertzsprung-Russell diagram is usually abbreviated to HR, and is basically a graph of luminosity against temperature. 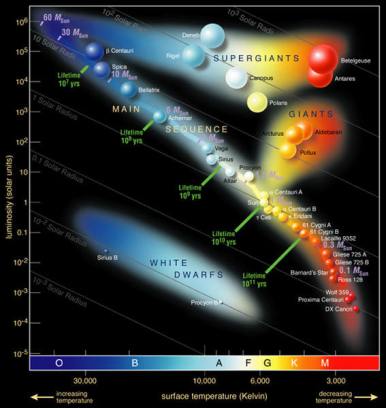 You need to be able to sketch this, so let’s observe the notable features of this graph.

The y-axis is the luminosity relative to the sun, so the sun should be plotted at the 1 solar luminosity mark. The x-axis is the temperature, but here it is decreasing, rather than increasing. It’s not the way we usually plot temperature. Most HRs start at 50’000 K and finish at 3’000 k, consider that the ideal range for you to plot.

(On the diagram above, it also has stellar classes (OBAFGKM). You don’t need to know about them or plot them. They are simply a way of classifying stars and makes describing them easier.)

The diagram has a very long diagonal stripe that goes from top left to bottom right. This is the main sequence stage and stars live most of their lives here.

The diagram above also has Giants and Supergiants, which cover the areas above the main sequence line. You don’t need to draw both separately, in fact just a bubble in the top right corner of your graph is enough.

lastly, there’s the blob under the main sequence stripe, where white dwarfs live. Drawing an oval near the bottom left corner is all you need to do.