We first need Parallax. After about 150 light years, parallax is useless. Instead, we use main sequence fitting.

If we take a close star object of known distance (calculated from parallax) and measure its luminosity, we could find the distance to a similar star in a far away galaxy .This is because two stars similar in temperature, metallicity and size will have similar luminosity.

We can set up set up two equations for the close and far star that gets rid of their luminosity and uses only intensity (much easier found) and distance. 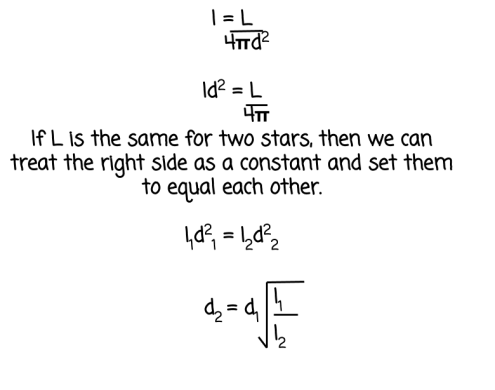 Above, I cancelled out the constants and L, leaving only the distances and intensities. This is how we “calibrate” our methods; finding a distance with one technique, then using it to adjust the next one. Hence, we use the name distance ladder.

If we analyse each star more we can correct the errors and get a distance with 95-97% accuracy.

Standard candles are simply objects suitable for main sequence fitting, as they have universally regular luminosities. Cepheid variables and type 1a Supernovae are our top objects.

There’s lots of Cepheids in the close by Large Magellanic cloud, so all we need is to find a distant galaxy that has them. Once a galaxy has been found, we can use the intensity-distance equation and find a distance!

How do astronomers use distance ladder?

If you plot some data of nearby Cepheid variables against one in a distant galaxy, you’d get a graph that looks similar to this. In the real world, data would rarely have such a nice correlation.

The blue ones are the close variable stars, and the purple is the one in the far away galaxy.

You can read off the graph the intensities of the purple and appropriate blue star (needs the same pulse period) and sub it into the intensity/luminosity formula from before!

In further galaxies, type 1a supernovae can also be used, but there’s less of them out there.

Leave a Reply to How Do We Take Pictures of The Milky Way? – My Hubble Abode Cancel reply