Oh Be A Fine Girl Kiss Me!

A few nights ago I was outside, observing the dark night sky. If I find a star I want to learn more about, I’ll search it up and just one letter on the facts page will tell me a handful of information about the star.

And that’s where this week’s post idea came from. Tonight I’ll be talking about what that special letter is and the different types of stellar classification that we use.

“Oh be a fine girl/guy kiss me” is a well-known phrase, which is actually an acronym used for grouping stars.

OBAFGKM are classes used by the Morgan-Keenan system. It’s the most used method of grouping stars, mainly based on temperature and spectral lines. The letters are sometimes added to HR diagrams, like below: 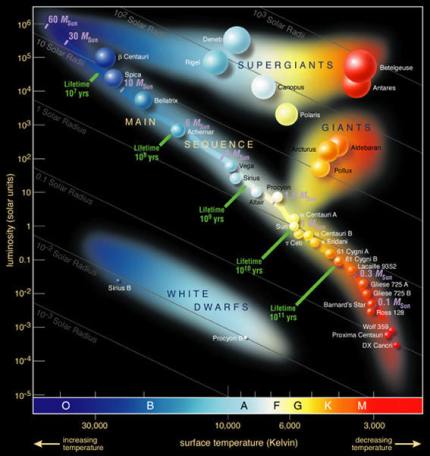 Only the very hottest stars are labelled O-type. These stars can be dwarfs, main sequence stars, or giants/supergiants.

To radiate such high amounts of energy, O-type stars need to be massive, or at least larger than their B, A, F, G, K, & M neighbours. They are the hottest, most luminous, largest, and rarest stars in the universe.

O covers temperatures above 30’000 K, and look blue because the majority of light they emit is ultraviolet and blue.

As we move down the system, the stars get cooler, less luminous and smaller (depending on whether it’s a dwarf, giant or main sequence).

Both these classes are homes to many blue giants, supergiants and white dwarfs. Rigel, Bellatrix, and Spica are all famous examples of B-type stars. The northern hemisphere’s most loved giants, Sirius and Vega, are both A-types.

F type stars are white. They emit mostly green light, but also lots of red and blue light, so it all balances out as white light. This type ranges between 7’600 K and 6’000 K. Canopus and Polaris are F-type stars.

Our sun is a G-type star. They’re mainly yellow, and quite small. G barely has any giants unlike the other classes. This weird phenomenon is called the Yellow Evolutionary Void. Temperatures range between 6’000 K and 5’300 K.

K and M stars are either small red dwarfs, or red giants/supergiants. Small main-sequence stars emit light with low energy, such as red light and infrared radiation. Red giants have a very cool surface, but their cores are working away, fusing heavier elements up to iron.

M-type main sequence stars are the most abundant stars, but are very difficult to see since they’re often not that luminous. On the flip side, M is home to some the galaxy’s largest supergiants (these you can definitely see), Betelgeuse being the most well-known.

This part of the Morgan Keenan classification system (OBAFGKM) is called the Harvard spectral system.

Just one letter can tell you a lot about a star. But to many, one letter just isn’t enough.

After the letter, a number from 9 to 0 is added to give more information on the surface temperature. A B-type star could be anything between 30’000 K and 10’000 K, which is a huge range! The number system is useful, because it adds a bit more precision.

Luminosity is displayed using roman numerals. 0 or Ia+ is written for hypergiants, I  is for supergiants, II for bright giants, III for giants, and IV is used for for sub-giants.

I know what you’re thinking, that’s a lot of giants!

Most stars will have a V, which indicates main-sequence. VI is used for sub-dwarfs, but SD is sometimes used, and VII or D is reserved for dwarfs.

This part of the Morgan Keenan system is called the Yerkes system.

Stars That Don’t Fit In

To accommodate more varied stars, we need to expand the system.

White dwarfs are given the class D, rather than writing OVII or BVII.

Wolf-Rayet stars (gigantic stars with little hydrogen and short lives) are written as a W or WR, followed by another letter conveying the most dominant element in the star.

C is reserved for carbon stars which are red giants that have an abundance of carbon in their atmosphere. You could actually put them in a normal class, but instead we write a C followed by another letter indicating what OBAFGKM class it would belong to.

S is also used for Carbon stars, but those with high amounts of Zirconium when it goes through slow neutron-capture processing (this is how we get elements heavier than iron in stars).

There are stars cooler than 2’000 K, and don’t even fit in the M class. These stars are usually red dwarfs or brown dwarfs. For them, three new classes, L, T and Y, were created.

Those in L can support some fusion but most don’t. These are the smallest of red dwarfs and the largest of brown dwarfs.

T is reserved for brown dwarfs with lots of methane in their atmosphere, and have surface temperatures no higher than 1’300 K.

Y has about 17 objects in it, the coldest dwarf being 250 K. Most things in the Y class are sub-brown dwarfs and are no more than 25 Jovian masses.

Here’s how you would write one of these using the MK system:

That’s it for Stellar Classification today! I hope you enjoyed learning about it, and I recommend trying to incorporate it into your own observations!