Why is Jupiter so Stripy?

Jupiter is a stunning planet to observe, and an easy target for astronomers in both optical and radio waves.

But what makes it so colourful and stripy? 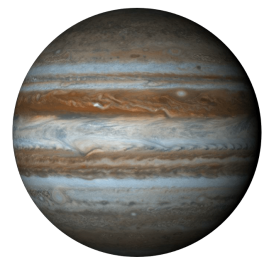 It’s like a vibe check, but with vocab (my desperate attempt to be edgy).

Zones and Belts make up the stripes of Jupiter, and surprisingly do change over time! Zones are the light-coloured bands around Jupiter. There are 7 zones, the largest being at the equator (called EZ). The Great Red Spot is encapsulated within a zone.

Belts are the darker stripes, made up of 6 stripes plus the two poles. Oval BA (Red Spot Jr) is contained within a belt.

Both types of bands circulate around the planet, but sometimes in different directions, which causes some serious stormy activity between them!

The zones and belts stay distinct supposedly as a result of jets between them, often reaching over 360 km/h! These jets move in different directions (moving away from the equator) depending on whether they are the boundary between a zone and belt, or a belt and zone.

In the picture below, you can see that the top of belts/zones move a different direction to the bottom of them (EZ being the exception because the directions reverse at the equator). The best example is probably the belt just above the Great Red Spot, which is incredibly faster than the bands!

What’s the difference between the stripes?

In zones there’s a high concentration of ammonia ice in the top layers of the atmosphere, ammonia being a very light-coloured compound. The belts, on the other hand, are less dense in ammonia. Belt clouds are thin and tend to sit closer to the surface than those in zones, making the belt look a darker shade.

As for the differing colour, there is a theory that the compounds in the belts are a stronger orange-y brown from exposure to UV light. These compounds (thought to be hydrocarbons or sulphur or phosphorous) are called chromophores, and are present in both belts and zones (and leaves). However, the high density of ammonia ice in the top layers of zones mask the darker colours.

With that being said, we have little clue as to how this magnificently stripy structure came to be!

There’s one idea that the distinction is caused by upwelling and downwelling, two occurrences seen a lot in oceans. The main models that try to explain how Jupiter’s atmosphere works have unique flaws and successes, so hopefully we’ll cut the pear in two and find one that works soon!

I thought I'd share one of my oldest #astronomy books, written before Neptune's other moons' discovery! Such beautiful images, and a great read. #space #astrophysics #science
Do you like my new vest? I knitted it myself (and made a little Flamm's paraboloid for all you black hole enthusiasts)! #space #astronomy #astrophysics